Waikari and Wine – a match made in Heaven

Waikari and Wine – a match made in Heaven 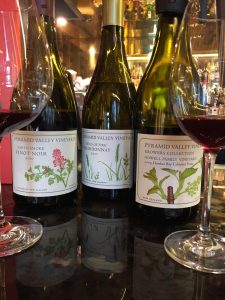 New Zealand has rightly gained a reputation for being one of the most exciting producers of New World wines, with regions such as Marlborough, the Hawkes Bay and Central Otago becoming buzz words among the global wine-drinking public for wines of reliable and consistently high quality.

But there is no such thing as one style of New Zealand wine, and no region is better proof of that than North Canterbury, where a handful of focused producers have established vineyards in challenging climatic conditions with the purpose of making unique, site-specific (we could say “terroir-driven”) wines. Phil and I recently visited four of them – Bell Hill, Pyramid Valley, Black Estate and Greystone Vineyards – to see and taste for ourselves some examples of Kiwi vintners doing things in a different way.

A deep seam of limestone runs through the Waikari river basin, which, along with a very cold climate, gives this tiny settlement a strong similarity to the French region of Burgundy – which is why the vintners at Bell Hill and Pyramid Valley eschewed New Zealand’s better known, more widely planted and climatically forgiving regions to establish their vineyards there. Both grow, like Burgundian vineyards, exclusively Pinot Noir and Chardonnay grapes. Both vineyards are also high-density planted, meaning the vines and vine rows are planted closely together, again reflecting Burgundian practices.

The fact that both of these remarkable vineyards began with a search for a specific set of geological and climactic conditions, before there was even a single vine planted, shows a focus and intent that runs through everything they do, all in search of making great wines.  The dedication invested in this cause is reflected in the fact that these decisions equate to making the work of growing grapes to make wine a lot more labour intensive and risky. These are two vineyards that have chosen a less beaten and more difficult path.

Bell Hill, our first stop of the trip, is a very small site carefully selected by Sherwyn Veldhuizen and Marcel Geissen for its specific properties. Planted and worked entirely by hand in hard limestone soil, Bell Hill produces a small yield of serious, powerful Burgundy-style wines that display both great intensity and finesse.

As we clambered up and down the slopes that house the vines, Sherwyn stopped to made a ball from the calcerous clay and showed us a pit dug out of the hillside, giving us physical illustrations of the unique soil structure which had first attracted her and husband to the site in 1997.

Bell Hill now produces three wines – Old Weka Pass Road Pinot Noir, made from younger wines that lend it an accessibility early on, and Bell Hill Pinot Noir and Chardonnay. The limestone soil lends the Chardonnay mineral and stone fruit flavours with lengthening acidity and a tight structure, while the Pinot Noir is primarily earthy rather than fruity with strong tanins. Both are serious and thought provoking wines, as well, of course, as being a great pleasure to drink.

In wild contrast to Bell Hill’s tiny and somewhat stark location, Pyramid Valley is a sprawling 200 acre farm. Biodynamic from inception, the site boasts wandering farm animals and a variety of complementary plant growth. Pyramid Valley ferments its wines using only indigenous yeasts, meaning that visitors must, upon entering, surrender their shoes in a “boot exchange” to avoid the introduction of foreign yeasts.

“The Boot Swap” to protect the soil

This was for us just the beginning of Pyramid Valley’s exceptional hospitality – Claudia Elze Weersing, owner and winemaker, fed us a delicious lunch (actually this would be our second lunch of the day as we had also accepted an invitation from Bell Hill… but don’t tell anyone!) We were then joined by a number of vineyard workers from neighbouring vineyards and stayed up late into the night around the bonfire drinking both local and French wines and discussing the principles of biodynamics before spending the night in the delightful guesthouse. 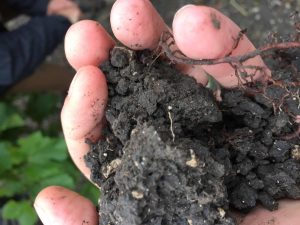 Healthy Biodynamic Topsoil from between the vine rows at Pyramid Valley

Pyramid Valley produces four wines in its home vineyard series, two Pinot Noir (Angel Flower and Earth Smoke) and two Chardonnay (Lion’s Tooth and Field of Fire) , each from a parcel of land within the farm carefully selected for its specific properties, and each named affectionately for its predominant weed species. Each parcel is worked differently in accordance with the demands presented by its unique characteristics to produce wines that while Burgundian in style are emphatically reflective of this extraordinary site.

While there are certainly many similarities between Bell Hill and Pyramid Valley, they were after all attracted to Waikari for the same very particular set of conditions, there are pronounced differences in their wines. Fittingly these differences reflect differences in the physical sites themselves. Bell Hill’s wines hold tightly to the most rigorous Burgundian winemaking, and impress with their power and grace, as the physical site of Bell Hill is itself tight and disciplined.

Pyramid Valley’s wines are allowed to roam more widely, drawing on influences from the contemporary natural wine movement, each evolving throughout the winemaking process in its own unique way, as Pyramid Valley as a farm spans widely and quite magically feels like a site that is evolving and changing with time. Both are remarkable places making completely unique wines that show new and diverse possibilities for what we will think about when we talk about New Zealand wines.

On the 8th of June, Whitebait is lucky enough to host a Winemaker’s Dinner with Claudia Elze Weersing of Pyramid Valley, pairing four of their library stock wines with dishes inspired by those wines. Contact Whitebait for bookings and further details.